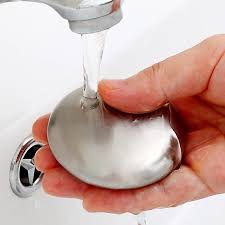 People are focusing on hygiene more than ever. Cleaning products are flying off the shelves, particularly soap. Did you know that there is such a thing as stainless steel soap?

Stainless steel is known for being a sanitary solution, which is why it’s used in hospitals, food plants and other environments where sanitation is of the utmost importance. So why not turn it into soap? Now, I don’t mean soap in the regular sense like the kind you use to wash your hands after going to the loo. Stainless steel soap is basically a piece of stainless steel formed into the shape of a soap bar.

The reason it’s called "soap" is because you rub the bar between your hands, just as you would a bar of the real stuff. While the metal doesn't kill germs or other bacteria like regular soap would, it can neutralize a strong odor on the hands. Like regular soap, simply rub the bar of stainless steel on your hands after handling something smelly, like onions or fish, and most of the smell should disappear. Although it is not entirely clear why this creation neutralizes odors, some researchers think that it’s because the stainless-steel binds to sulfur compounds in various substances, which reduces odors.

So, while twiddling your thumbs and binging Netflix during quarantine, hit up your friendly neighborhood metal manufacturer and get a bar to try out for yourself!